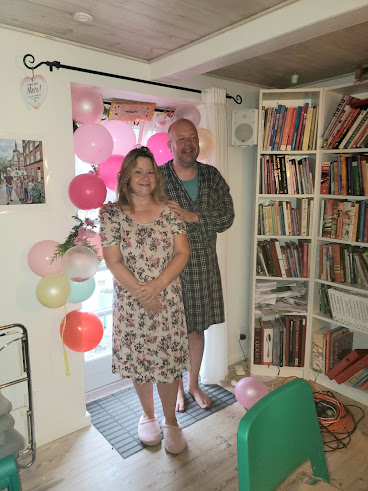 What are you doing for your copper anniversary, we were asked recently. This struck me as an odd question. Firstly we were married in February and it was August so I had little notion I should be celebrating anything anniversary related. Secondly I believed copper was quite an early - one six, maybe seven years so why would I be celebrating several years after the event? And thirdly, I'm not into that kind of traditional stuff where each anniversary should supposedly be celebrated by a different material. I could just about imagine celebrating the big ones, but Thomas and I lived together for a number of years before marrying so the anniversaries always feel a bit off any way and having married so late in life (I was 41, he was 37) the chances of reaching the significant ones seems less likely.
That was when I learnt two new things. Not only are several of the traditional anniversaries different in the two countries: Danes have some odd things like a Pomegranate anniversary (19 years) and a Tulip anniversary (23 years) and though the UK says year 7 is copper, Denmark reserves copper for 12.5 years! You see Danes don't start the big ones at 25, they go down to 12.5, so last Saturday was in fact our Danish copper anniversary!
Danes always have very set ways to celebrate things. Obviously we've no friends or family in the vicinity who know when we got married. But with Thomas's folks in the country anyway because of our niece's confirmation, another very Danish tradition, we were awoken by Léon playing his violin, followed by Brita, Peter, and the three kids singing us Danish songs. We came out to find our dining room door decorated and then got a huge breakfast from the bakery in Vissenbjerg. We even got a Happy 12.5 years wedding anniversary card and were made to pose in our nightwear for a photo in front of the decorated door!
It is always interesting to take part in a celebration of something alien to your own culture because you get to see the world through another's eyes.

What are you doing for your copper anniversary, we were asked recently. This struck me as an odd question. Firstly we were married in Februa...